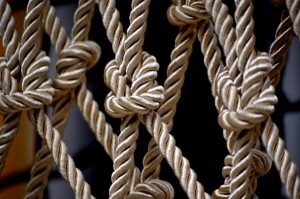 If you’ve had sex outside of marriage, you formed a soul tie—or more than one—that may be the cause of the emotional, psychological, and physical problems that are now tormenting you.

What is a soul tie? A soul tie is the spiritual link that is formed between two souls during sexual intercourse. First Corinthians 6:16 describes a soul tie: “And don’t you realize that if a man joins himself to a prostitute, he becomes one body with her? For the Scriptures say, ‘The two are united into one.’ ” This uniting into one is a soul tie.

A soul tie created by sex outside of marriage is the unlawful tying together of two souls. This unlawful tying together causes spiritual bondage between the two souls for the rest of their lives unless the soul tie is broken through the power of Jesus Christ. Because of this spiritual bondage, the demonic spirits found in one person can transfer to the other person, and vice versa.

Interestingly, in some states, when a couple wants to get a divorce, the judge will ask them if the marriage has been consummated. In other words, he will ask them if they have had sex yet because, according to the law in that state, a relationship becomes a marriage when the couple has had sex.

So, if a girl has sex with five guys, in God’s eyes she has married five times and her soul has been tied to at least five other souls. In most cases, the number of soul ties is even greater since each of the guys may have had multiple sex partners.

Do the math. This means that a girl who engages in premarital sex with one guy can be tied to hundreds of other souls without even knowing it. Yet, all of those other souls are affecting her every day.

Consider this example. Let’s say a guy sleeps with a girl who is involved in the occult. Afterwards, he begins having nightmares and develops unreasonable fears. This guy, who, before sleeping with the girl was never afraid of anything, is now terrified of everything. Why? The reason is that the demons of the occult in the girl’s soul transferred to the guy’s soul when he slept with her.

Not a pretty picture, is it? Does it make you think twice about having sex outside of marriage?

Questions: 1) Do you have to repent of unlawful soul ties? 2) Are you aware that Jesus Christ is the only way for you to break unlawful soul ties? 3) Will you ask for and receive His cleansing and restoration of your soul? In Psalm 23, He promises to restore your soul. The word “heart” is another word for “soul.”

41 thoughts on “Sex and Soul Ties”