The church sanctuary filled with the sweet fragrance of Holy Spirit’s Presence.

As I raised my hands in worship and sang praises to the Father from the depths of my heart, I suddenly found myself transported in the spirit to another realm. I was standing
in the throne room of Heaven, participating in a magnificent worship service. Millions of saints, with uplifted holy hands, sang in joyful praise and worship to the Father. 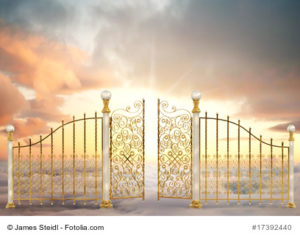 My eyes scanned their faces, radiant with love and adoration. All eyes faced forward and focused on the front of the room. Following their unified gaze, my eyes beheld a
Brilliant Being Who sat on a magnificent throne at the far end of the huge space.

And my heart instantly bowed.

His countenance glowed with intense pleasure at watching His children enjoy His presence. His lips held a smile that was beyond description in its beauty and its grace.

His demeanor was at once kingly yet common. Common in the sense of humble and unassuming.

I could not take my eyes off of Him.

Nor did I want to.

The music was festive. Lively.

My feet began to move in rhythm to its joyful sounds. All around me, my brothers and sisters in Christ began to dance before the Father, their faces beaming with the fun of
the moment. Tambourines sounded; cymbals crashed; voices rose in glorious timbres and tones to praise the great and wonderful God of the Universe.

The joy in the hearts of the saints was palpable as they filled the atmosphere with their loud shouts of praise.

Suddenly, my eyes noticed movement on the Throne. To my great surprise and even greater delight, Abba Father got up from His throne, descended the long stairway
leading up to it, and joined His children in the dance.

Cheers arose from the congregation as they watched Father join them in their dance.

My heart beat wildly. Tears flowed from my eyes. I was taken aback by His utter humility. He had become one of us. Indeed, I could tell that His enormous delight lay in
that very act of becoming one of us.

My eyes remained glued to the Father, as did my heart. One at a time, He took the hands of His children and spun them around in circles of joy. Laughing. Singing.

No one was slighted. Everyone was touched by His loving hand.

And His loving heart.

As I watched, mesmerized by His love, He turned toward me.

My heart skipped a beat as He headed toward me.

All time stood still as His compassionate eyes penetrated my spirit with their infinite love. Now He stood before me, kind and expectant. Nodding slightly, he took both of my hands in His, and I felt the merging of His heart with mine.

In that instant, I was the only one in the large hall. Everyone else had disappeared into the background.

Abba Father had eyes only for me.

The next thing I knew, He was whirling me around the dance floor, as a Father does with His little girl at a wedding.

And, as a little girl dancing with her Papa at a wedding feels the delights of His acceptance, His approval, and His love, so did I.

Together we whirled around the dance floor, His strength carrying me, His eyes never leaving mine. They twinkled and sparkled and laughed. They danced in merriment and rejoiced in delight.

And, most of all, they loved me.

My heart joined my feet in being lifted off the ground.

I had the distinct impression that as Abba danced only with me, He was also dancing only with each of His children in that great hall. On a level I cannot explain, I knew that,
in relating to Abba, everyone felt as though he or she were the only one in the entire sanctuary. That is the way of the Father.

There is something about the Father’s love that makes one feel that she alone is the apple of His eye.

For several beautiful moments, I was caught up in the ecstasy of that other-world experience. Then, slowly, and a bit sadly, I stepped back from the spirit realm and
returned to the church sanctuary to rejoin my physical body.

But I returned a different person. I returned as one who had experienced the goodness of God in a profound way.

I returned as one who would henceforth know firsthand that I am deeply loved, totally accepted, and warmly approved by the Father.

Dr. MaryAnn Diorio writes riveting fiction that deals with the deepest issues of the human heart. Her latest novel is A SICILIAN FAREWELL, Book 2 of The Italian Chronicles trilogy.